A 29-year patient was admitted to the ICU with septic shock and severe acute respiratory distress syndrom (ARDS) due to viral pneumonia, probably caused by the H1N1 influenza virus and bacterial coinfection. The patient was on renal replacement therapy and extracorporeal membrane oxygenation (ECMO) and in a stable condition. Cultures were positive for Enterococcus faecalis and later Multi-Drug Resistant (MDR) Acinetobacter baumannii. 8 days after admission there was an acute clinical deterioration and CPR was adminstrated before the endotoxin removal therapy, at which point the measured endotoxin activity was 0,68 endotoxin activity units (EAU).

A 29-year patient was admitted to the ICU with septic shock and severe acute respiratory distress syndrom (ARDS) due to viral pneumonia, probably caused by the H1N1 influenza virus and bacterial coinfection. The patient was on renal replacement therapy and extracorporeal membrane oxygenation (ECMO) and in a stable condition. Cultures were positive for Enterococcus faecalis and later Multi-Drug Resistant (MDR) Acinetobacter baumannii. 8 days after admission there was an acute clinical deterioration and CPR was adminstrated before the endotoxin removal therapy, at which point the measured endotoxin activity was 0,68 endotoxin activity units (EAU).

Two weeks earlier he had suffered signs of an upper respiratory infection with cough, rash on his face and neck, eyelid edema and high temperature of 39,3°C. He had been prescribed an antibiotic (amoxycillin/clavulanate), antihistamine medication and a steroid but as he had been getting worse he had been braught by an ambulance to the district hospital. He was admitted to an internal medicine ward and ciprofloxacine with roxitromycin were administered.

On the 4th day he was transferred to the ICU because of progressive dyspnea, cyanosis and hypoxemia. He was intubated and mechanical ventilation started with FiO2 1,0 and PEEP 12 cmH2O. Noradrenaline was started when he became hypotensive despite fluid therapy. Test results showed high CRP (130 mg/l), slightly elevated PCT (0,5 ng/ml), low platelet count and pronounced leucopenia (WBC 1100 /mcl). The RT-PCR test for influenza virus type A/H1N1 was negative. Respiratory, blood and urine cultures were also negative. The CT scan showed bilateral pneumonia with left-sided hydrothorax that was subsequently drained and 1000 ml of exsudative fluid was removed.

On admittance to the Medical University Hospital ICU the patient was in septic shock, had severe ARDS with pO2/FiO2 ratio of 61, bilateral opacities on chest X-Ray and anuria due to rhabdomyolysis. Bronchoscopy showed a scarse amount of thick, mucous secretions in the left bronchi, otherwise normal airways. The procalcitonin level was 20 ng/ml, CRP 114 mg/l and the WBC count 4800/mcl.

﻿The diagnosis of severe ARDS due to viral pneumonia, probably caused by the H1N1 influenza virus with bacterial coinfection was made. Broad spectrum antimicrobial therapy was started with imipenem/cilastatin, clarithromycin, vancomycin and oseltamivir. Rescue therapy with high frequency oscillatory ventilation was instituted but no improvement in oxygenation was observed with pO2/FiO2 ratio of 67. CVVHDF was also started and continued until the 25th day of ICU treatment.

On the 2nd day HFOV was changed to conventional mechanical ventilation and veno-venous ECMO was initiated and continued for the subsequent 12 days.

Cultures taken from tracheal secretion, blood and urine gave positive results for Enterococcus faecalis. In the following days the clinical status has improved. On the 4th day vasopressors were weaned off and the circulation became stable with the pulse of 90 beats per minute and the blood pressure of 140/65 mm Hg. The infection biomarkers decreased significantly – the CRP from 222 to 102 mg/l, procalcitonin from 88 to 7,9 ng/ml and the WBC was 8700/mcl.

On the 8th day, during the morning round, an acute deterioration in patient’s status, while still on ECMO, was witnessed. A rapidly progressive septic shock developed with profound circulatory collapse. Infusions of noradrenaline and soon also adrenaline were started. Despite this the blood pressure dropped down abruptly to 29/16 mm Hg while the pulse increased to 137 beats per minute. 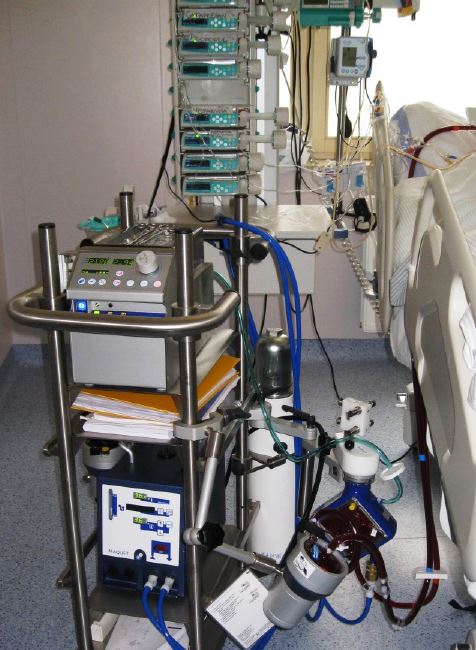 Cardiopulmonary resuscitation was started and the dose of noradrenaline was increased up to 5,3 mcg/kg/min and adrenaline to 1,3 mcg/kg/min without any circulatory effect. Hydrocortison 100 mg i.v. was administered without any effect either. Only after second dose of intravenous steroid, 40 mg of methylprednisolone, the blood pressure increased to 120/60 mm Hg with the pulse of 130 beats per minute and CPR could be stopped. Noradrenaline infusion could be reduced to 1 mcg/kg/min and adrenaline infusion to 0,06 mcg/kg/min. Intensive diagnostic microbiological investigation was started. The PCR assay of the blood detected Acinetobacter baumanni and was consistent with results of the respiratory cultures, taken on day 5 and 7, that grew Acinetobacter baumanni MDR as well as blood cultures drawn on day 7 and 8. Whole blood endotoxin activity assay was also done and the measured endotoxin activity was 0,68 EAU. Targeted therapy with intravenous and inhaled Colistin was added to Meropenem, Linezolid and Oseltamivir and the endotoxin removal treatment was carried out.

The patient stayed intubated for the following 5 weeks and then successfully extubated. Tetraparesis due to an ICU-acquired weakness was one of the major problems during weaning from mechanical ventilation.

He recovered and was discharged from the ICU 2 weeks later. After one and a half month he visited the hospital by himself with only minor muscle strength deficits and was still improving. 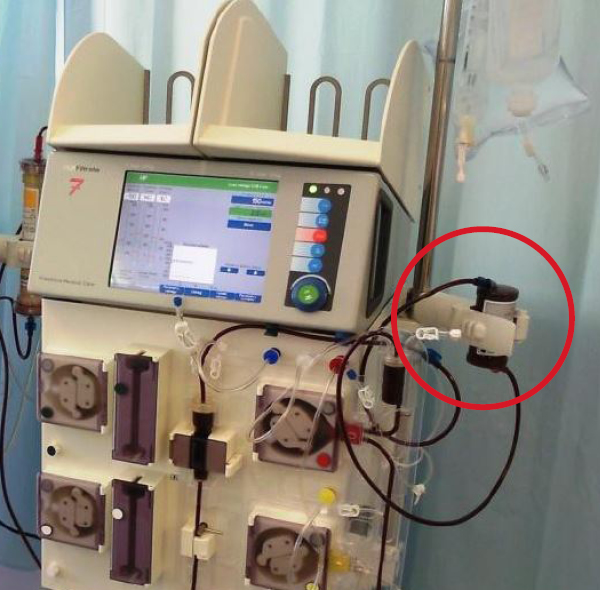